I’m always interested in different approaches to ergonomics, especially for sitting at a computer, which I do too much of and which is mean to my body. The “normal” task seating position just isn’t normal at all, resulting in forwarding head carriage (as you get tired especially), poor circulation, and for me certainly, adaptive shortening of the muscles because my legs are usually bent.

Current research has focused on so-called “open postures” which increase the angle between the torso and the hips. This increases circulation because the body is in a more natural position. Another approach gaining popularity is one that provides the ability to move, also known as “sit to stand” seating. The notion is that the body is not meant to be stationary for long; it evolved to be constantly in motion. Extended time in the same posture tires the same muscles, inducing poor postural habits. Because those muscles tire out, circulation is reduced, inflammation starts, and “adhesions” set into the soft tissue as your body attempts to compensate and protect. This is what leads to RSI. By moving around more, you distribute the load to different muscles, in addition to helping circulation through movement and shifting of pressure points.

I’ve always figured that something approaching a dentist’s chair (minus the drilling) would be the most comfortable for long periods. But hey check this out, it’s pretty close! 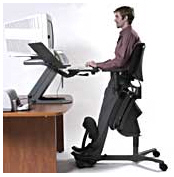 I’ve seen a version of this notion before but it was clunkier and didn’t have casters so you could move the whole rig. That’s gotta be exciting! Of course, you’ll either need the funky keyboard+monitor tray shown or a “sit to stand” desk.

Another more stylish approach is a chair that offers continuous movement, like the Freedom chair. The notion is that it’s balanced, with no springs to tighten or buttons to lock in place, so as you move it reclines and opens up naturally to match you. It has a nice look (the more observant may have spied it in the President’s “situation room” in Season 2 of 24). I tried one of these for a few days some time ago and while I very much appreciated the design intent, I found the back to be a bit too hard-shelled, but more importantly, the design just didn’t work for computers because as you recline you need the computer monitor and keyboard/mouse to go with you!

To me, the ultimate version of the Freedom chair is one that acts as an exoskeleton with secondary muscular support; moving with you but helping you fight gravity. I may try to sketch something out sometime.