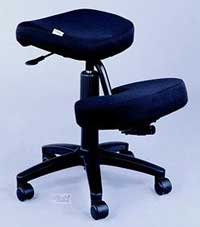 I was over at someone’s place the other day, and they have a kneeling chair, so I was able to try it out.  He is an avid computer gamer (read: oh, I forgot to go to bed last night because my guild was on a dungeon raid…) who logs 100  hours or more at the keyboard (he has a computer job in addition to his gaming addiction), and his old chair (an Office Depot special) wasn’t cutting it.  Since he wasn’../2004/06/herman_miller_a.html”>Herman Miller Aeron Review post), he picked up a kneeling chair by Jobri for a couple hundred dollars.

Anyway, he’s a big fan of it and sits in the thing for hours on end without any back pain (before he was having trouble with lower back pain and tension knots in his neck and upper back).  I got to try it out and it felt a little weird at first (I just felt like my balance was off… you feel like you’re being pushed into the kneeler cushion), but after a few times getting up and down and typing for a while, I got used to it.  It actually did seem comfortable too.

The kneeler chairs work by taking more of your weight on your knees (you rest them against the padded lower cushion), which is supposed to let you sit in just the right position to keep the natural S curve to your spine.  Apparently, this is a good thing.  All I care about in a chair is whether or not it’s still comfortable to sit in at the end of the day.  And this fellow swears up and down by the chair, saying it’s totally gotten rid of his back pain.  (He wasn’t trying to sell me one or anything, so I believe him.)

He said it was by Jobri, but I’m not sure if the one pictured here is the exact model I tried (it’s what I could find a picture of for you on Amazon).  Still, I think they are probably similar.  This one has Tempur-Pedic cushioning (yes, the mattress people do chairs too) and runs $229, which sounds about like what my friend paid for his.  That makes it about 1/3rd the price I paid for my Aeron, so if a kneeling chair works for you,  it’s probably not a bad bet, financially or ergonomically speaking.